By default, in a Kubernetes cluster with the Istio service mesh enabled, services can only be accessed inside the cluster. However, some of the services may need to be exposed to external networks as well. Kubernetes and Istio provide a variety of means to get external traffic into your cluster including NodePort, LoadBalancer, Kubernetes Ingress and Istio Gateway. With all these options, which one should be the right choice for your service mesh running in production?

I will compare all the available options, dig into the technical details, and provide a workable solution at the end of this article. Hopefully, it could be useful for your service mesh production.

Note: To better understand this article, you may need to know some Kubernetes and Istio background knowledge in advance, such as Pod, Service, NodePort, LoadBalancer, Ingress, Gateway and VirtuanlService. In case that you’re not familar with these concepts, you can still continue reading and refer to the links at the end of this article for answers when getting questions.

First, let’s review how the services inside a Kubernetes cluster can be accessed.

As the smallest deployment unit, Pods are dynamically created, destroyed and migrated among the minion nodes in the cluster. As a result, a pod is ephemeral and its IP changes every time after it’s recreated. Therefore, it’s difficult to access Pod directly by its IP address.

To solve this problem, Kubernetes uses Service as an abstraction for a group of backend Pods. A Service is bound to a ClusterIP, which is a virtual IP address, and no matter what happens to the backend Pods, the ClusterIP never changes, so a client can always send requests to the ClusterIP of the Service. There is a Kube-proxy which is responsible for routing client requests to a chosen backend Pod in every node.

Kube-proxy is a go application which can work in three modes:

In this mode, Kube-proxy installs iptables rules which capture traffic to a Service’s ClusterIP and redirects that traffic to Kube-proxy’s listening port. Kube-proxy then chooses a backend Pod and forwards the request to it.kube-proxy serves as an OSI layer 4 load balancer in this model. Since Kube-proxy runs in the userspace, packages need to be copied back and forth between kernelspace and userspace, adding extra latency in the proxy process. The advantage is that Kube-proxy can retry other Pod if the first Pod is not available.

To avoid the additional copies between kernelspace and userspace, Kube-proxy can work on iptables mode. Kube-proxy creates an iptables rule for each of the backend Pods in the Service. After catching the traffic sent to the ClusterIP, iptables forwards that traffic directly to one of the backend Pod using DNAT. In this mode, Kube-proxy no longer serves as the OSI layer 4 proxy. It only creates corresponding iptables rules. Without switching between kernelspace and userspace, the proxy process is more efficient.

This model is similar to iptables because both ipvs and iptables are base on netfilter hook in kernelspace. Ipvs uses hash tables to store rules, meaning it’s faster than iptables, especially in a large cluster where there’re thousands of services. In addition, ipvs supports more load balancing algorithms.

With service ClusterIP and Kubernetes DNS, service can be easily reached inside a cluster, however, this approach only provides very basic service discovery and limited load balancing policies. If you want more advanced features, such as flexible routing rules, more options for LB, reliable service communication, metrics collection and distributed tracing, etc., then you will need to consider Istio.

After deploying Istio in a Kubernetes cluster, Istio takes over the communication between services with sidecar proxies. The communication between services is no longer through Kube-proxy but through Istio’s sidecar proxies. The request process is like this: First, a client request is captured and redirected to the sidecar proxy by iptables. Then, the sidecar proxy chooses a backend pod according to the service discovery information and routing rules obtained from the control plane, and forwards the request to it. 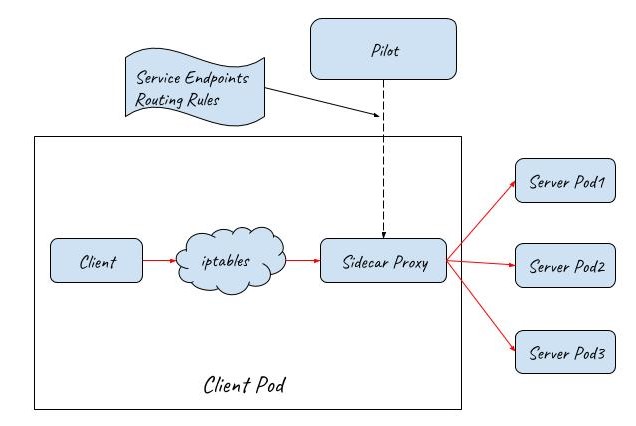 ClusterIP is only reachable inside a Kubernetes cluster, but what if we need to access some services from outside of the cluster? Kubernetes provides the following ways to expose services to external networks.

With NodePort, Kubernetes creates a port for a Service on the host, which allows access to the service from the node network. The Kubernetes online document only introduces the concept of NodePort, but it doesn’t explain the technical details. Let’s find out how it’s implemented using an experiment.

www.katacoda.com is an interactive learning and training platform. You can explore almost all the Kubernetes features once registered. I’ll use this website to show how NodePort is implemented under the hood. I encourage you to test it by yourself in Katacoda, it’s easy to use and totally free!

Enter this URL in your browser: https://www.katacoda.com/courses/kubernetes/networking-introduction. Katacoda will prepare a Kubernetes cluster for you, then you can connect to the Kubernetes master with a web-based interactive terminal.

Run the following command to create a NodePort type service.

Display the created Service with the following command. We can see that webapp-nodeport-svc has been created, and Kubernetes also created a NodePort 30080 for it.

The output of netstat command shows that it’s Kube-proxy who is actually listening on 30080 port.

Kube-proxy also created the corresponding iptables rules to capture traffic sending to 30080 NodePort and redirect that traffic to the two backend pods. All the iptables rules are list below, and I add comments to explain each rule’s function.

As you can see from the above experiment, if a Service is declared as NodePort type, Kube-proxy will create a port on the node and listen on that port. But Kube-proxy will not directly accept traffic from node networks, instead, it will create the corresponding iptables rules which will capture the traffic sent to the NodePort and redirect that traffic to the back-end Pods.

This diagram shows how traffic flows into a Kubernetes cluster with the help of NodePort:

NodePort is a convenient tool for testing in your local Kubernetes cluster, but it’s not suitable for production because of these limitations.

The below diagram shows how external traffic enters a Kubernetes cluster with the help of a load balancer. Two NodPorts are connected to the load balancer to allow external traffic to come in. There are three Pods in the cluster serving the client requests. The numbers of Nodeports and pods can be scaled out/in accordingly based on the working load of the system. 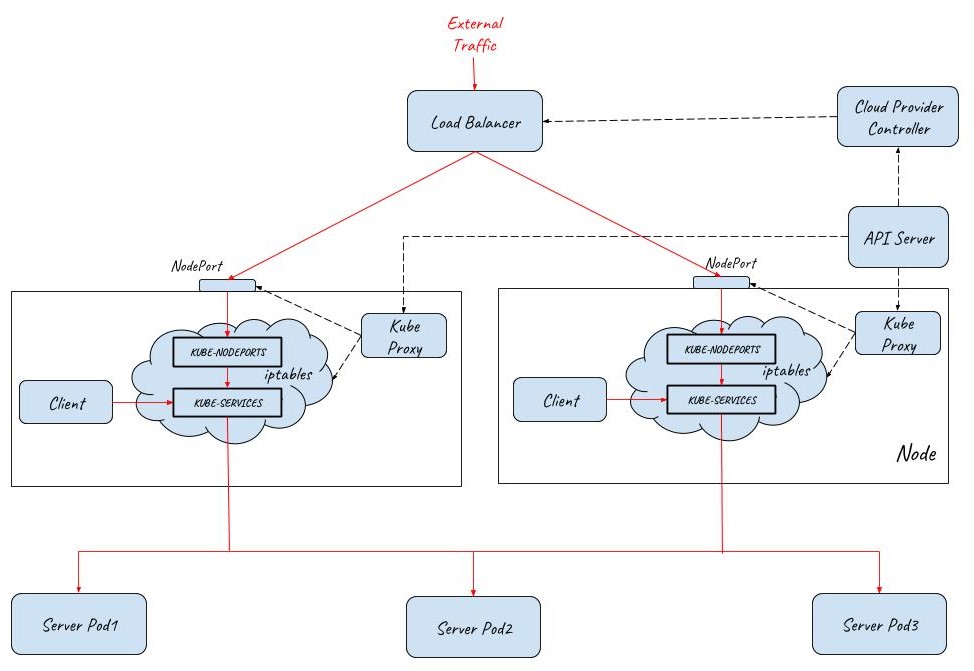 Note: A Service of LoadBalancer type is just a request to create the load balancer, the actual work is done by cloud providers, such as AWS, Azure, Amzon or Openstack. Pulic cloud provider can also associate a public IP to the created load balancer to accept traffic from the Interet.

Kubernetes LoadBalancer works in OSI layer 4, meaning it can only dispatch inbound traffic to the backend services based on the 2-tuple of IP and Port. As a result, if we need to expose multiple services to the outside of a cluster, we must create a LoadBalancer for each service. However, creating multiple LoadBalancers can cause some problems:

To solve these problems, Kubernetes Ingress resource is used to declare an OSI layer 7 load balancer, which can understand HTTP protocol and dispatch inbound traffic based on the HTTP URL or Host. 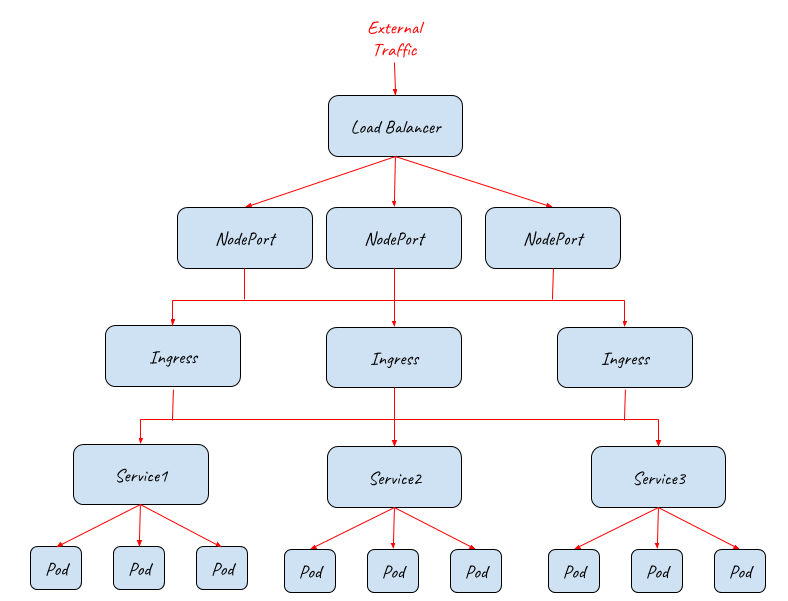 From the above diagram, we can see that the whole system is highly scalable. Each of the NodePort, Ingress or Pod layers can be scale out/in accordingly to handle different working loads.

The below diagram shows how the full entry path is implemented under the hood: 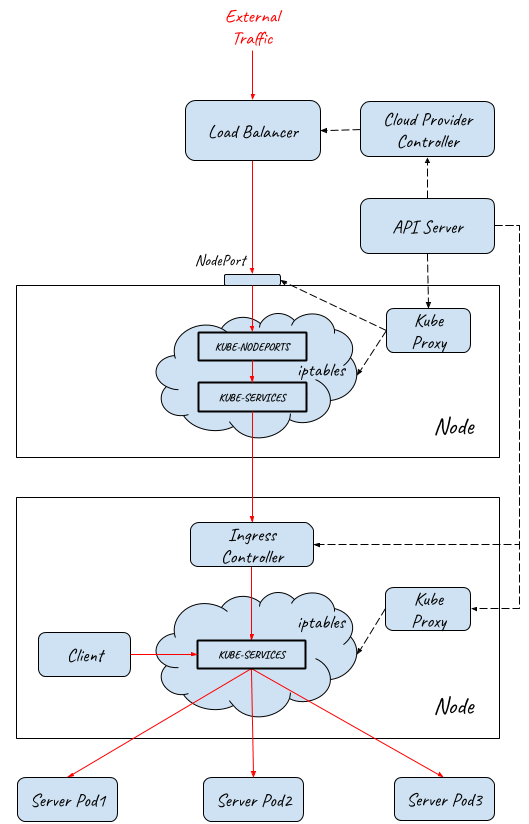 How to Choose the Ingress Gateway for your Service Mesh?

Istio is doing a great job by providing a communication infrastructure layer for all the services running in the service mesh. However, until now, Istio doesn’t provide an ingress gateway solution reading for production.

Kubernetes Ingres as the External Traffic Entrance for a Service Mesh

To address these concerns, Istio Gateway resource has been introduced in the 0.8 release to replace Kubernetes ingress.

Istio Gateway resource is even simpler than Kubernetes Ingress. It can only configure L4-L6 functions, such as port, host, TLS key and certification. But Gateway can be bound to an Istio VirtualService resource, which is the same resource used for routing configuration inside the mesh.

By this means, Istio can provide the same capabilities at the entrance of the mesh as inside the mesh. Both the ingress gateway and the sidecar proxies are managed by a unified mesh control plane. 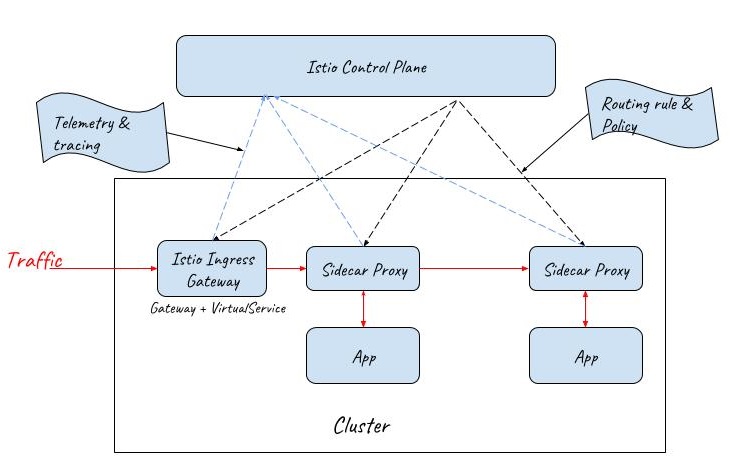 Istio Gateway as the External Traffic Entrance for a Service Mesh

With all the promising features provided by Istio, Istio Gateway seems like a good choice for the external traffic entrance of a service mesh. However, there is still something missing here.

A service application running in production usually has some other application-level requirements for the traffic entrance，such as:

To fulfil these requirements, there’s a dozen of API Gateways on the table, including Ambassador, Kong, Traefik, Gloo, etc. All these API Gateways can be used as a Kubernetes ingress controller, but they all add some kinds of extensions to try to fill the gap between Kubernetes ingress and the reality, unfortunately, in an incompatible way. It’s a very little chance that these extensions could be standardized and included in Kubernetes Ingress or Istio Gateway in the foreseeable future. In addition to that, as far as I know, no one ingress controller officially declared supporting the integration with Istio control plane to provide Istio routing rules.

Now let’s come back to the question thrown up at the beginning of this post: Which one is the right choice for the ingress gateway of your service mesh? Kubernetes Ingress, Istio Gateway or API Gateway? My opinion is that neither of them is capable of that by its own due to lack of some functions.

Given that it’s difficult to find an ideal out-of-box implementation which can provide both the functions of an application-layer API gateway and an Istio ingress gateway, a practical solution could be using a cascade of an API Gateway and a mesh sidecar proxy as the external traffic entrance. 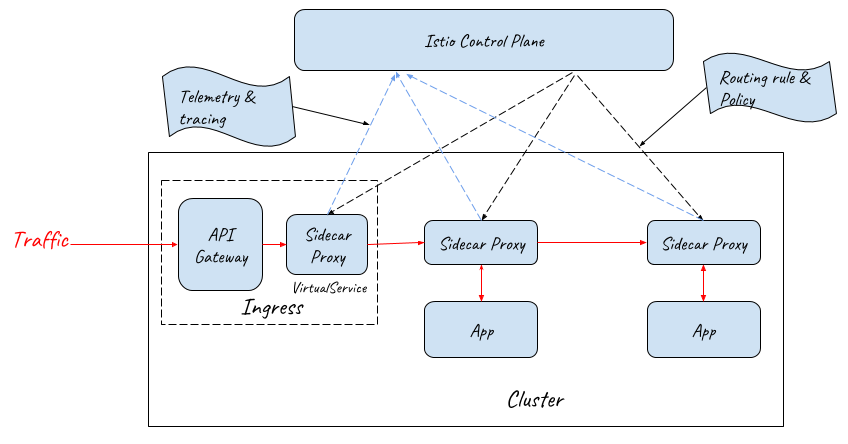 Note: NodePort and LoadBalancer should also be deployed to let external traffic in, but they are not displayed in this diagram for simplicity.

Performance considerations: This approach introduces an additional hop at the mesh entrance, resulting in small more latency for client requests, but the cost is acceptable compared with the benefits.

In a service mesh, external requests have to go through a dozen of proxies and microservices to accomplish the business process, so one more proxy at the entrance shouldn’t make a significant difference. If your system is very sensitive to the latency time, I’d like to suggest you reconsider whether microservice and service mesh should be used for it. Anyway, no one architecture pattern is a silver bullet for every business scenarios.

If network throughput becomes the bottleneck, we can scale out the mesh ingress by deploying multiple API gateway and sidecar proxy combinations to handle the incoming traffic for load balancing.

Conclusion: A combination of an API gateway and a sidecar proxy could be a production-ready, full-fledged external traffic ingress for the service mesh. With this solution, we can customize and extend the API gateway to meet various application-level requirements, and leverage the flexible traffic routing, distributed tracing, metric collection and other service mesh capabilities provided by sidecar proxy. This is a production-ready ingress solution for a service mesh.

What are your thoughts on this? Let me know by leaving comments after the post.