Just like a written signature of a document, but it’s in digital form. The desired features:

Generate a Pair of Public Key and Secrete/Private Key

We usually sign the hash of the message rather than the message itself.
It’s because singing a fixed size hash(such as 256 bit) is much more efficient than signing a long message, and the collision-free feature of hash function can assure that no one can forge another message which has the same hash.
So the sign function is like:
signature := encrypt(sk, hash(message))

Verify the Signature with Message

Others receive a message with a signature which is claimed to be sent by the signer.
They verify the message with the public key of the signer, which has already been published to all.
isValid := verify(pk, message, signature)

Use Digital Signature with Cryptocurrency

Signing a hash pointer is identical to signing the whole structure of the data in the hash pointer points to.

If we can verify the signature of a message with a public key，we can be sure that message has been sent out on behalf of the person behind of that public key，in other word，the public key is an identity of that person.

There are two kinds of identities

In some cases, such as signing a business contract or sending an email, you need to let the other side know who you are and able to verify your true identity, such as your name, your organization, so they can trust you when doing business with you.

Obtain a digital certifacte from an authority 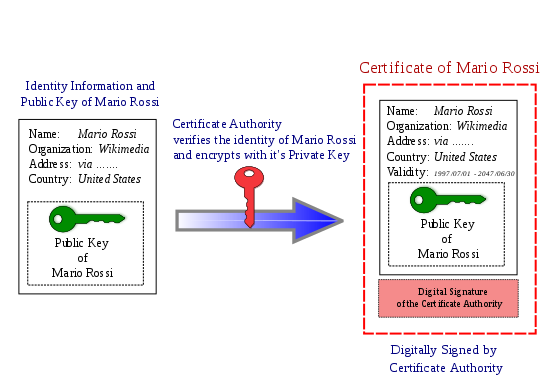 Verify a digital signature using a certificate issued by an authority 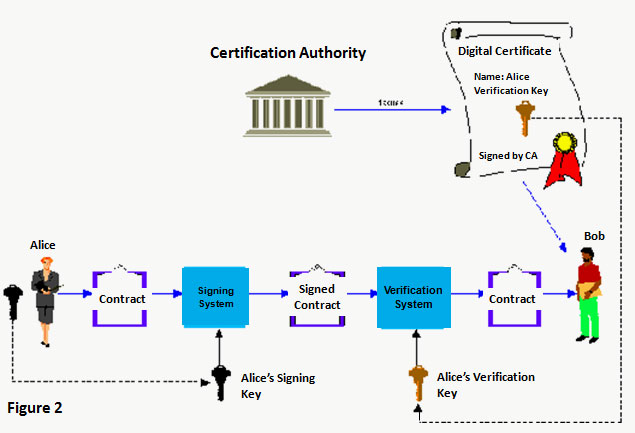 Sometimes, you may want to keep anonymous, in that case, you just publish your public key without a certification. One example is the identiy in Bitcoin, you might not want to let others known how many money you have, especially you have a lot and prefer to keep a low profile.

Even without certification, you can still use that anonymous identity(the public key) to do business with others as long as the people don’t care who exactly you are.